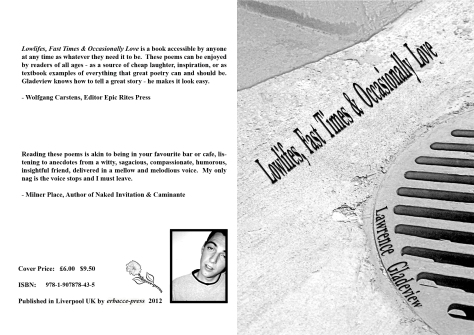 Reading these poems is akin to being in your favourite bar or cafe, listening to anecdotes from a witty, sagacious, compassionate, humorous, insightful friend, delivered in a mellow and melodious voice.  My only nag is when the voice stops and I must leave.

Lowlifes, Fast Times & Occasionally Love is a book accessible by anyone at any time as whatever they need it to be.  These poems can be enjoyed by readers of all ages – as a source of cheap laughter, inspiration, or as textbook examples of everything that great poetry can and should be.  Gladeview knows how to tell a great story – he makes it look easy.

Gladeview bought a used car.  The backseat was stained, with who-knows-what, strewn with empties and butts and a couple of books.  He cashed in the empties, cleaned up the butts, tossed the books in the trunk.  Now, with a couple of bucks worth of gas money, he set off on his own journey, ready to fill the backseat with his own stuff – stains, garbage, words, and all.

– RL Raymond, Author of Half Myths & Quarter Legends and Weakdays

If I had to choose between Gladeview and a shot of good tequila, he’d lose out. Other than that, he wins every single time.  As a writer, Gladeview makes my day.

– John Yamrus, Author of Bark and They Never Told Me This Would Happen

Who says poetry can’t be entertaining, that tragedy, large or small, isn’t tinged with sharp humor?  Full of short, rapier-like observations of daily life guaranteed to make you giggle, then wonder as you reread them, this book will have you begging for more.  The droll sarcasm and leaps of deadly irony demand a crawl up inside Lawrence Gladeview’s oddly pointed head to see what this cat is smoking, drinking, thinking.  Please, more.

– Jerry Smaldone, Author of All Flesh Shall See It Together

boy
was
he wrong.

Delivered by a lesser poet these vignettes would be amusing; but in the deftly aloof hands of Gladeview, they excel in irony, pacing, imagery, and dammit, likeability. From the defiant son in law who has unwisely decided to serve cider not eggnog, to the tough talking badass whose stance against a mugger makes his girlfriend laugh, these rapid-fire poems are clever without mercy. The sparse language strikes just the right tone for an affable wisecracking character navigating his way through the fast times of young adulthood; times, he will soon discover, that go by faster than he can ever imagine.

In Gladeview’s slim second collection of poems Lowlifes, Fast Times & Occasionally Love, he continues to use his sparse, self effacing style to explore ordinary situations: making out in the back seat of a car, talking to people in bars and of the many misunderstandings between people which derive from a confusion over what words mean.

These are clear, uncluttered poems which everyone can read and understand the first time around. The poems are tightly constructed and deceptively simple, but because of their brevity, they lack intensity or depth.  Gladeview’s  poetry is transparently obvious and does not intend to explore darker boundaries.

In his micro poems, Gladeview’s style and subject matter are highly reminiscent of John Yamrus’s, the American poet. Both poets use dissected lower case prose, frequently incorporate direct speech and both work towards a mildly humorous yet wry comment on life.

Here are two fine representative examples of Gladeview’s work in Lowlifes, Fast Times & Occasionally Love. They exude a cheeky humour and infer that the ‘lowlife’ can bring luck & perhaps valour. They are reprinted here with the permission of the author.

i lit
a
smoke
& said
better
stop off
at
the
liquor
store
first.

the radiator
gave up
& the
radio
quit
miles ago

In the final analysis, in rereading Gladeview’s book this afternoon, I kept thinking about Bukowski’s famous comment to his friend Jory Sherman in 1961 from which we can all learn: ‘I think a man should be forced to write in a roomful of skulls, bits of raw meat hanging, nibbled by fat slothy rats, the sockets musicless staring into the wet ether-sogged, love-sogged, hate-sogged brain, and forevermore the rockets and flares and chains of history winging like bats, bat-flap and smoke and skulls ringing in the beer.’

Bukowski was ranting to his friend about what he found fault with the Masters: ‘I have just read the immortal poems of the ages and come away dull. I don’t know who’s at fault; maybe it’s the weather, but I sense a lot of pretense and poesy footwork: I am writing a poem, they seem to say, look at me! Poetry must be forgotten; we must get down to raw paint, splatter.’

In Gladeview you will find no pretense, no fancy poesy footwork- just some measured streaks of ink down the page to fondly & gently tug at the meat of things.

This review is deliberately fleeting because this collection is decidedly short.

Lawrence Gladeview’s poems are addictive. By the end of this chapbook I wanted more. So, I re-read the book, again and again. I’ve been privileged to have devour numerous chapbooks and full length poetry collections over the last five years, and those of which I’ve enjoyed have shared several things in common. They contain poems that are sharp, accessible and display the writer’s wry sense of humour; and most importantly they cut out the frilly bullshit that often litters poetry. Gladeview excels in getting straight to the point.

See, I like my writers to be a tad scuzzy. I want to read about the nitty gritty; everyday details that many of us often neglect to acknowledge. It’s this canny eye that makes Gladeview an astute observer who simply writes about what he sees. Though this collection is relatively brief, containing just twenty one poems, these tales of late night adventure and modest domestica are worth reading. It is quite astounding how Gladeview is able to tell humdrum stories within such a simple framework and still make them bloody interesting.

The title and the first poem of this chapbook get you right in the mood for a high-speed read. Although the skinny poems race down the page, there’s no shortage of detail – 35 Chevy, stale Budweiser & aftershave – so you’re instantly in the scene.

It feels cinematic at times, with dry, pithy dialogue (nice set of wheels / i told her // you should see it from the back seat) and a sense of being dropped voyeuristically into an intimate moment. The poems link smoothly, from car to car, to bar, to a party, to an apartment; there’s drinking and sex, there are road trips and random conversations. The chapbook also builds up a picture of the narrator, who believes in spontaneity:

‘you gonna /be here long?

my plane
left in
10 minutes
but i found
myself
saying
you bet let’s
have another.’

The crisp style is deceptively off-hand, and these could be read as prose if they weren’t written in sharp, often one-word lines, with the title invariably running on into the first line. Gladeview’s use of lower case letters and ampersands also contributes to the casual effect, as though these are simply jottings in a journal. But the narrow, column-like layout evokes a stance, a setting, and it is this minimalist approach that warrants the definition ‘poem’.

It takes a brazen confidence to translate crude humour to poetry, but because of his lightness of touch, Gladview pulls it off. When asked by ‘a college gal’ what he thought of the evangelical poet who read before him in a bookshop, the narrator answers:

every time
I heard him
say Job
all I could
think of
was
blow.

Gladeview’s line breaks give the reader pause – usually to laugh. While there is an absence (possibly blatant avoidance) of metaphor or lyricism, the pleasure of these poems is in their anecdotal liveliness.  These incidents epitomize youth and reckless, free living, and there’s a keen sense of irony in many of the dialogues:

‘you bought
the book
to use as
a coaster?
bob asked

no you
sarcastic
ass i bought it
at a reading

Gladeview’s a Bukowski for the Facebook generation; wry, laconic, a shoulder-shrugging hedonist. The speed and terseness of these narratives are cumulatively effective in portraying the lowlifes, fast times and occasional love of the title. At any moment the narrator might convey arrogant superiority, bravado, or just as readily, empathy with random people, such as the passenger who sits next to him on a bus:

‘clutching
her ticket
to
anywhere
but here’

Not all the poems strike home. ‘Carla took me’ is one that has no impact on me – I fail to see the humour or any cleverness. But most of them do work. And Gladeview comes into his own when it comes to dialogue – most of his poems are snippets of backchat or witty banter, capturing the subtle dynamics between friends, lovers, and strangers. Feminists may baulk at his nothing-to-lose laddishness, but I suspect that’ll only entertain him. Note his repeated use of the word ‘gal’:

try
spelling out
the alphabet!
I shouted

sam
asked
does that
really work?

i wound up
gave
the ball
a good ride
& said
sam
it works
every time.

What’s enjoyable about Gladeview’s work is his off-hand, cheeky approach and the fact that there’s no self-importance. Gladeview takes nothing too seriously here.   All he’s looking for is that smile of recognition from his reader. And he’s getting it, from this one. 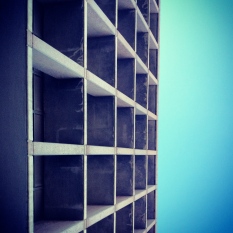 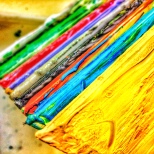 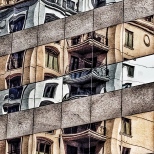